The Diaries of Adam and Eve – a reading of Mark Twain’s work by Steve and Joanie McPeak. A whimsical look at Genesis from Mr. Twain’s somewhat sardonic viewpoint, done by the McPeaks, bringing the viewpoint of an actual married couple to this delightful work.

The Jinin’ Farms – Eugene Fields is, sadly, a relatively unknown writer of the late 19th century.  This work, read with heartfelt emotion by Wes George, is a story of two men who grow up together and spend their entire lives on adjoining farms.  The location is not specified, but is certainly southern.  They experience joy, tragedy, war, and family as their life journey progresses.  At the end what they have is an enduring friendship.

The Cask Of Amontillado – Edgar Allan Poe’s macabre masterpiece is interpreted by theater veteran Jim Woods.  Poe was a master of creating suspense and drama, and this story is perhaps his most powerful example of this process.  Jim’s reading will leave you on the edge of your seat gasping.

Hills Like White Elephants, The Story Of an Hour – These are two stories written from a woman’s perspective.  Hills Like White Elephants (Ernest Hemingway) concerns a woman in an unsatisfactory relationship who is at a crisis point.  The Story Of an Hour (Kate Chopin) concerns a young woman who finds out her husband has died.  The title refers to the hour until she finds out he is alive after all.  Sarah Foley chose these two stories and reads them with a perceptive eye towards what the two women are experiencing.

Theater In the Works Improv Show – TWCP’s Improv troupe steps up to the plate for a half hour of spontaneous zaniness.  The essence of Improv is spontaneity, so no spoilers here.  The troupe, put together by Bryan Williams for this show, lives up to their reputation.  ‘Nuff said.

The Piano Bar Returns – Theatreworks Piano Bar has become a local institution in a very short time.  All of the live performances have been sellouts.  This is our live stream version of the event.  Piano Bar creator and director Joanie McPeak and pianist Ann Nichols are committed to not repeating material, so the Piano Bars are always new.

Cancel Me Please? – This show is a multimedia (well, dual media, at least) production from the fertile imagination of Zach McPeak.  He came up with a very different look at life. With humor resembling that of Andy Samberg, Zach has written quick sketch vignettes and commercials. It is sardonic, skeptical and funny.  Well worth a watch.

St Joan – George Bernard Shaw is a lion of the theatre.  Fortunately for us, his works are in the public domain.  St. Joan is his portrayal of Joan of Arc.  It is a powerful work.  We chose to do Scene 5, which is after Joan became the hero of Orleans and when she is advocating an advance on Paris, which seals her fate.  It is a dramatic reading, and the cast rose to the occasion.  A riveting experience.

20 Music in 20 Minutes – Robbie Hendrix and Demi Richardson are two extraordinarily talented people.  This show gives them the opportunity to showcase their musical and comedic gifts.  The pace is frantic, the singing is fantastic.  What else can I say?

Aunt Pearl Tells Us Like It Was – Theatreworks has done two of the plays in the “Greater Tuna” cycle, Greater Tuna and  Tuna Christmas.  Betty Jo Turner played Aunt Pearl Burrus in both.  Betty Jo is a treasure – a gifted actress and just a great person.  She reprises her character to opine, reminisce, and generally lay waste to preconceptions.  While we used Aunt Pearl’s character, the script is original.

WH.A.T. Radio Celebrity Talk More or Less with Seymore Less – Stevie and Lanetta Byrd came up with this show and took full advantage of the opportunity to create two characters each hilarious in their own way.  Stevie plays Seymore Less, a Radio host who has the misfortune to book Lunay Bird (Lanetta) on his show.  All sorts of craziness ensues as Seymore vainly tries to conduct an actual interview.  You can guess how Lunay responds to that.

Pennhouse Presents a Night in Time with Ruth Pace – Jonathan Penn, Demarco King and Tehillla Johnson come together for a tribute to the legendary Ruth Pace, who taught voice to countless students over the decades.  These three very talented musicians performed classical and traditional works in celebration of her gifts to our community.  Mary Helen Cameron was our pianist.

Songs From a Bard - Cathy Demott is a veterinarian in our community who is also a bard in the Society For Creative Anachronism.  In this show she brings her bard, Morgan Wolfsinger to the Black Box and weaves tales of intrigue, romance and drama from the dark ages.  These are enthralling stories told in traditional bard song fashion, making for an entrancing evening.

Negative Results – Longtime friends Zach McPeak and Corey Thompson join forces to produce a short film about two down on their luck guys trying to deal with the COVID era.  It’s a quirky, dark comedy which takes a sardonic look at what we are experiencing now.

Room 117 – This is an original one act play written about two men – one ex KKK, one ex Black Panther, who end up in the same room at a run-down nursing home, looked after by their flamboyantly gay nursing attendant.  It’s a dark comedy that takes an unflinching look at aging, race, prejudice and relevance.  Funny, but also  thought provoking.  Probably not suitable for small children.

Pirates of the Piedmont – The Pirates of the Piedmont are a local group (formed two years ago) who have been delighting audiences at festivals and various events with their crazy antics and Pirate themed music.  They are true to character, very talented musicians and just plain loads of fun.  You will come away chuckling, and probably singing at least one of the songs.

Christmas Stream – We decided to finish the year with a bang.  The Christmas Stream is a variety show (a few minutes shy of an hour) featuring music, spoken word, a short play and a sorter movie, all with a Christmas them.  Some favorites, and a couple of things you probably haven’t seen or heard before.  Oh, and a very special surprise at the end. 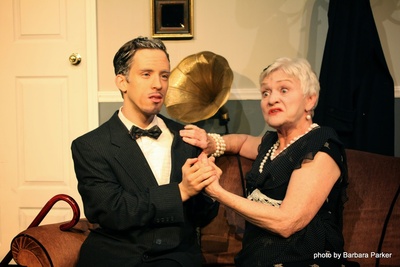