Petey and the Big Dog

World Premiere of New Musical, Petey and the Big Dog

The world premiere of a new musical entitled Petey and the Big Dog was July 18 -- 21, 2013 in the Black Box Theatre at 44 Franklin Street in Uptown Martinsville. . Music, lyrics, and script for the show are by local talents Tom Berry, Will Zimmer, and Scott Derks.

The plot involves a centuries old custom in which the young, clueless heir to the village fortune must shoot the wolf to win a bride. But teenage love refuses to cooperate and nothing goes according to plan. In the tradition of musical folk tale farces, Petey and the Big Dog assumes that cats talk, wolves sing ballads and everyone in the audience wants to attend a wedding. 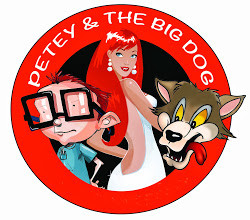